You’re browsing through the crowded aisles of Wal-Mart when, suddenly, you spot it. A wadded up  mess of hair bobbles along the row next to you as a frazzled looking woman rounds the corner. Her faded sweats really compliment that sickly, blotchy look her make-up-less face sports. You with your judgy Kim Kardashian eyes wonder why she couldn’t bother to slap on some mascara, but that’s because you’ve probably never realized how stupidly time consuming womanhood can be.

A while back, my boyfriend and I had a discussion that led to a grand epipheny. He claimed the majority of famous authors, chefs, and painters were men, and after much deliberation, I realized he was right. You know why? Because we’re too busy filling our eyebrows and blow-drying our frizzy-Lizzy hair.

Let’s say it takes the average woman fifteen minutes to put on make-up and that she wears make-up at least five out of seven days a week. Now, if she began wearing make-up at 13 and stops at 60, she will spend 183,300 minutes applying make-up. That’s roughly 127 days. I think Jenna Marbles said it best. 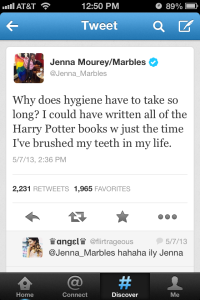 Then we’ve got jokesters like Dove to deal with and their Real Beauty Sketches video. Oh, you didn’t see it? Check it out below. They’re clearly trying to say “hey, you’re more attractive than you think you are” while they’re actually saying “big foreheads, round faces, and freckles suck.” Thanks Dove. There went another $28 for some heavy duty Bare Minerals foundation and $20 on bangs.

Of course, there’s more than just make-up. You work out for your cottage cheese thighs, shave an acre-worth of real estate daily, buff and polish your lizardly dry skin,  and spend hours painting your nails like little watermelons. And you think skinny jeans are fun? There’s nothing enjoyable about jeans tight enough to leave stitching indentions on your billowing thighs. In fact, half the time our jeans are secretly unbuttoned beneath that flowly, hipster shirt we’re wearing for maximum meal-time enjoyment. Why do we do it? To look like pretty ladies. 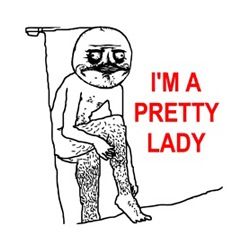 You may think I’m a weird feminist hipster who doesn’t wear make-up or girly clothes. Wrong. I love dolling up and dancing around with baby-bottom-smooth legs as much as the next girl. I rejoice in femininity and the color pink. This song pretty much sums it up:

Boys: the next time you see a girl who’s obviously spent four hours trying to look like Jennifer Aniston on a bad day, you tell her how awesome she looks.

6 thoughts on “On Being a Pretty Lady”